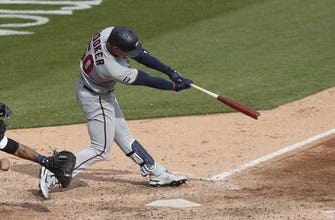 The Minnesota Twins made a few roster strikes Wednesday, putting outfielder Brent Rooker on the 10-day injured record with a cervical pressure and calling up left-handed reliever Brandon Waddell from the taxi squad.

To make room for Waddell on the 40-man roster, Minnesota transferred right-hander Edwar Colina to the 60-day injured record.

Recalled after infielder Josh Donaldson went on the injured record, Rooker has appeared in three video games for the Twins this season, making two begins in left discipline. He collected one hit in 11 at-bats (.091 batting common) and fanned six instances with no walks.

Waddell has three 1/three innings within the massive leagues underneath his belt, coming final 12 months with Pittsburgh. He allowed one run one two hits and two walks. In 2019, Waddell logged a 6.29 ERA and 111 strikeouts in 97 1/three innings at Double-A and Triple-A.

Colina heads to the 60-day injured record with proper elbow irritation. The 23-year-old has appeared in a single MLB recreation and allowed three runs on 4 hits and two walks in 1/three of an inning.

Minnesota wraps up a three-game sequence Wednesday towards the Detroit Tigers. Catch the sport on Bally Sports activities North, with “Twins Reside” starting at 11:30 a.m.